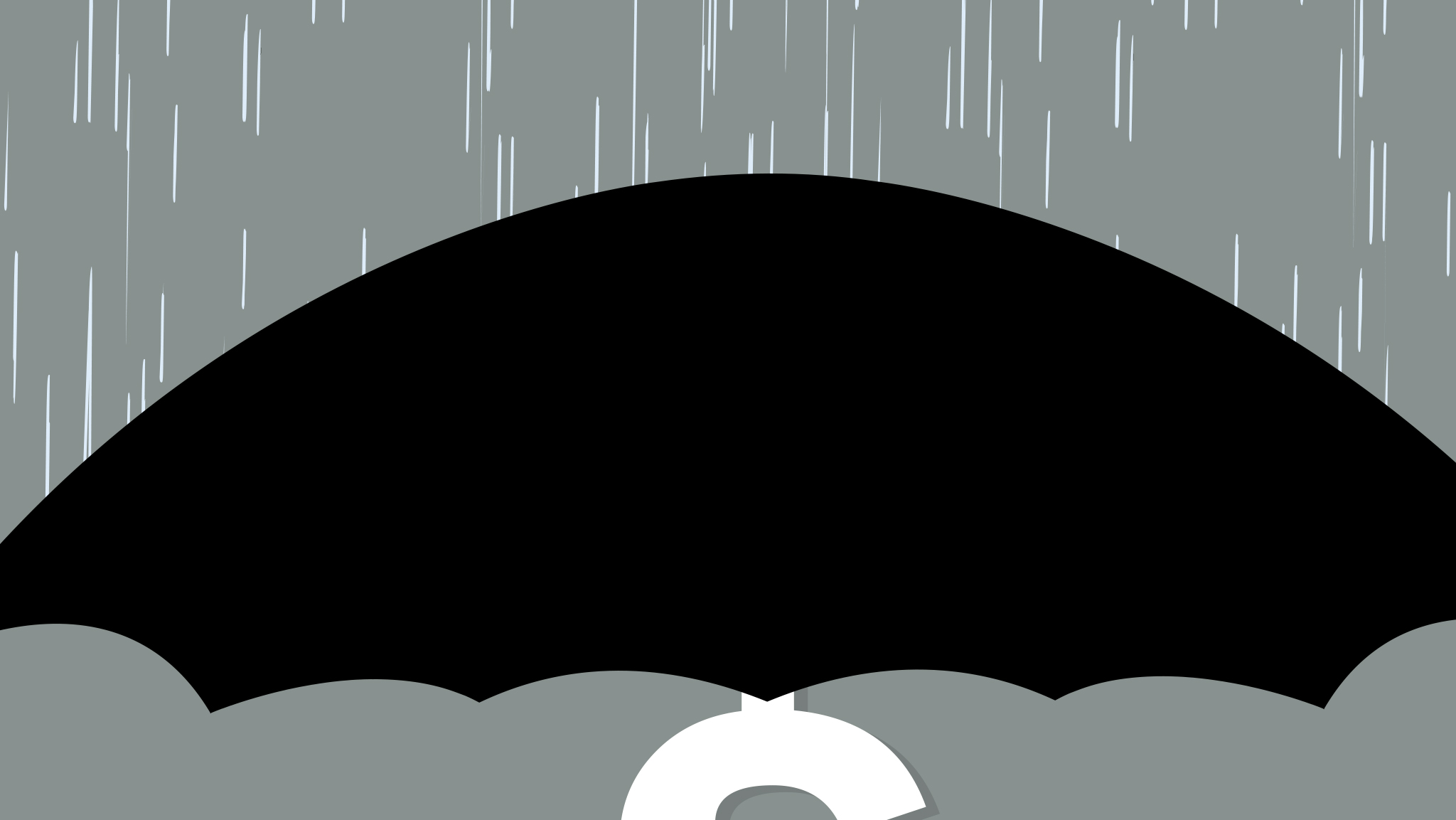 Gimme Shelter: The U.S. Dollar Trade and Its Risks

The resurgence of the U.S. dollar has been one of the leading investment stories of the last few quarters. A somewhat modest recovery in the United States has galvanized investors, who appear to believe once again in the currency version of the American dream. In contrast, headlines about the Eurozone malaise, the failed jump-start of the Japanese economy, and slowing growth in the emerging markets vindicate further depreciation in their respective currencies. No wonder strategists are forecasting further appreciation of the dollar (Ramage, 2015).

The comeback of the dollar appears very reasonable if based on a narrative about macroeconomic fundamentals. However, this narrative only partially reveals what has been taking place in the currency markets. It is insufficient for forming an educated guess about future scenarios and understanding the risk/return trade-offs that investors might be facing.

In this piece, I look at the performance of the U.S. dollar from a different angle. My goal is to explain the rally by looking at well-known currency factors and by illustrating their relationship with macroeconomic cycles. The classic paper by Meese and Rogoff (1983) showed that macroeconomic fundamentals are poor predictors of exchange rate movements at short horizons. In the spirit of the arbitrage pricing theory pioneered by Ross (1976), the cross-section of currency returns appears to be better characterized by a few risk factors. But which factors? There are at least three of them to keep in mind: the carry trade, momentum, and value. I contend that, in the prevailing market environment, the carry trade and momentum strategies sit uneasily with increasingly high valuations.

To explain what happens in currency markets, the usual suspect is the carry trade. This popular strategy consists of buying currencies of countries that offer relatively high cash rates and selling those of countries that offer relatively low cash rates. Depending on the measurement period and the sample of currencies considered, the carry trade has delivered annual returns above 4% and a Sharpe ratio higher than that of the U.S. equity market.1 However, as shown by Lustig et al. (2011), these returns do not appear to be a free lunch. Instead, they are likely explained by their correlation with global financial risk.2 The carry strategy is profitable in the long run, but it might result in painful losses precisely when investors might least want them.

This time, however, the carry trade as traditionally executed does not appear to be the main culprit. As Figure 1 displays, what we have observed in the last few months is the U.S. dollar’s broad appreciation against both developed and emerging market currencies. Lustig et al. (2014) show that this generalized trend is typically related to the “dollar carry trade.” 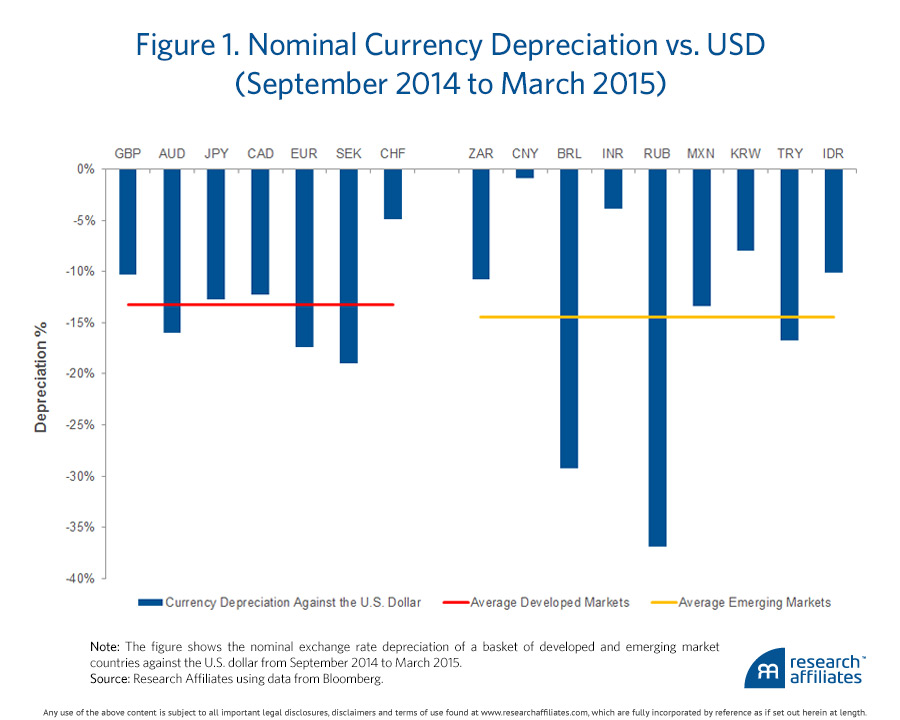 The dollar carry story is broadly consistent with the dynamics observed over the last months. Investors’ expectations of higher rates in the United States, along with lower rates due to quantitative easing (QE) in Japan and Europe, have been fueling the dollar’s performance. Moreover, returns on emerging market investments have been disappointing as well. International investors have been concerned about large current account deficits, geopolitical tensions, weak commodity prices, and unpopular governments in some emerging countries. Yet the dollar carry trade is not the safe-haven strategy they might imagine.

The dollar carry trade, like the old-fashioned carry trade, is a risky strategy. The dollar carry trade, which historically fed on relatively high cash rates, is currently feeding on expectations of higher cash rates. Hence, much like a momentum strategy, its recent success has largely come from an appreciating dollar. But the strengthening of the dollar has not been accompanied by higher short rates.3 In this environment, it is understandable that the dovish attitude of some Fed officials has recently spooked the markets and slowed down the dollar’s rise.4

In addition, U.S. investors who are selling foreign currencies are increasing their exposure to the risk of an economic slowdown in the United States. Hence, they are failing to diversify the macroeconomic risk that tends to hurt their income the most. In the medium and long run, as value strategies become more important in the currency markets, they may find themselves vulnerable to a weakening dollar and slower domestic growth.

The first risk, then, is that future U.S. interest rates might disappoint consensus expectations (Shepherd, 2015). Currency prices are forward looking, and by now they should already incorporate expectations of higher interest rates in the United States and of QE in Europe and Japan. Any further dollar appreciation should come either from an unexpectedly hawkish Federal Reserve stance or unexpectedly loose foreign policies. However, several signals suggest that Fed monetary policy might actually remain highly accommodative in the months to come. Recognizing that a stronger dollar might harm the economic recovery, some Fed officials appear to have misgivings about raising interest rates too soon or too far.

More generally, investors should be aware that momentum positions characteristically have rather short lives. By construction, currency momentum strategies have taken advantage of relatively transitory trends in foreign exchange movements. In comparison, carry trade strategies have typically exploited cash rate differentials that persisted over an extended period of time. The historical record suggests that, without positive surprises from the U.S. economy, the ongoing appreciation of the dollar might soon come to an end.

The second risk arises from the current price of the U.S. dollar. It appears to be overvalued with respect to the currencies of the United States’ major trading partners. Figure 2 illustrates that the U.S. dollar is more than 10% above its long-run equilibrium value as predicted by a simple application of the Purchasing Power Parity (PPP) theory.5 Given that higher valuations have generally been supported by higher interest rates, the current overvaluation might prove unsustainable in the medium term. The official U.S. unemployment rate is, at 5.5%, about 25–50 bps above its estimated equilibrium level, while core inflation is not far from its 2% target. Hence, it appears that permanently low interest rates are consistent with a U.S. economy running at the speed desired by the Fed. 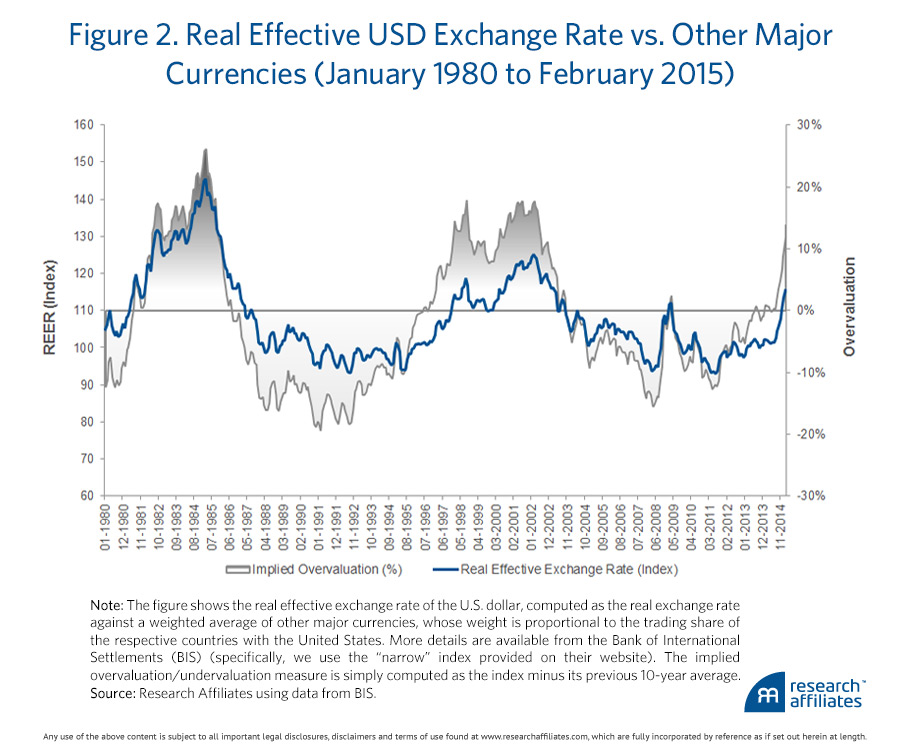 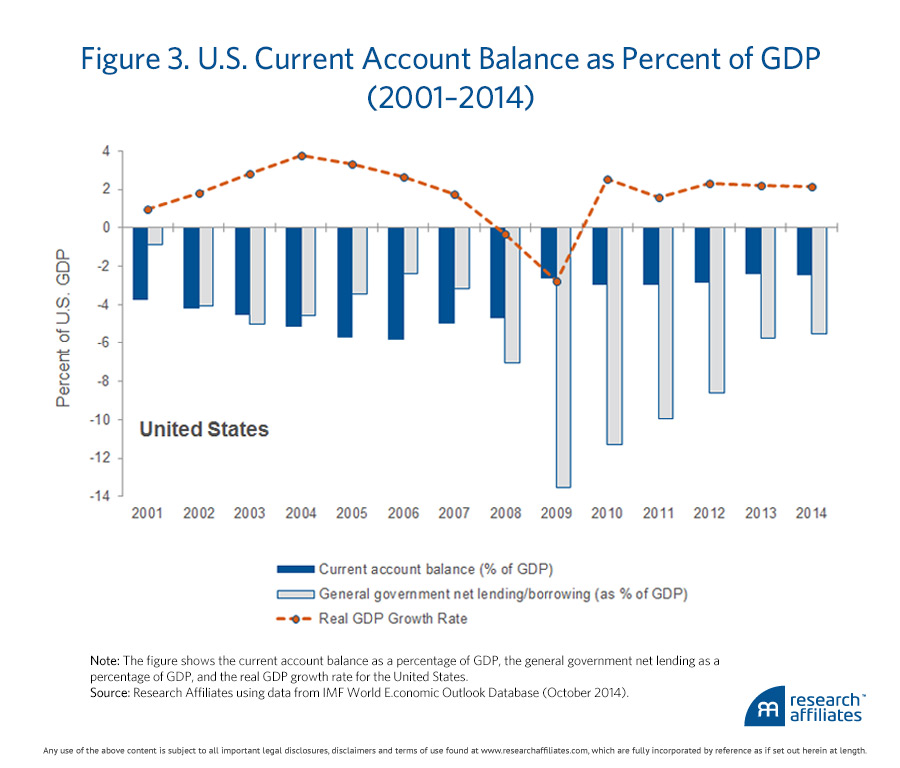 The current foreign exchange environment offers an opportunity for U.S. investors to diversify their portfolios. The U.S. dollar appears overvalued across almost the entire spectrum of currencies; this means there might be currencies which are priced below their fundamental value. In addition, a strong dollar might impair U.S. corporate earnings, boosting foreign markets. Finally, and perhaps most critically important for long-term investors, there are returns to be harvested from investing in countries with higher cash rates. In particular, the emerging markets offer the opportunity to invest in younger economies with greater growth opportunities. The historical benefits of diversification should induce investors to consider whether it is worth concentrating their risk exposure toward the U.S. economy.