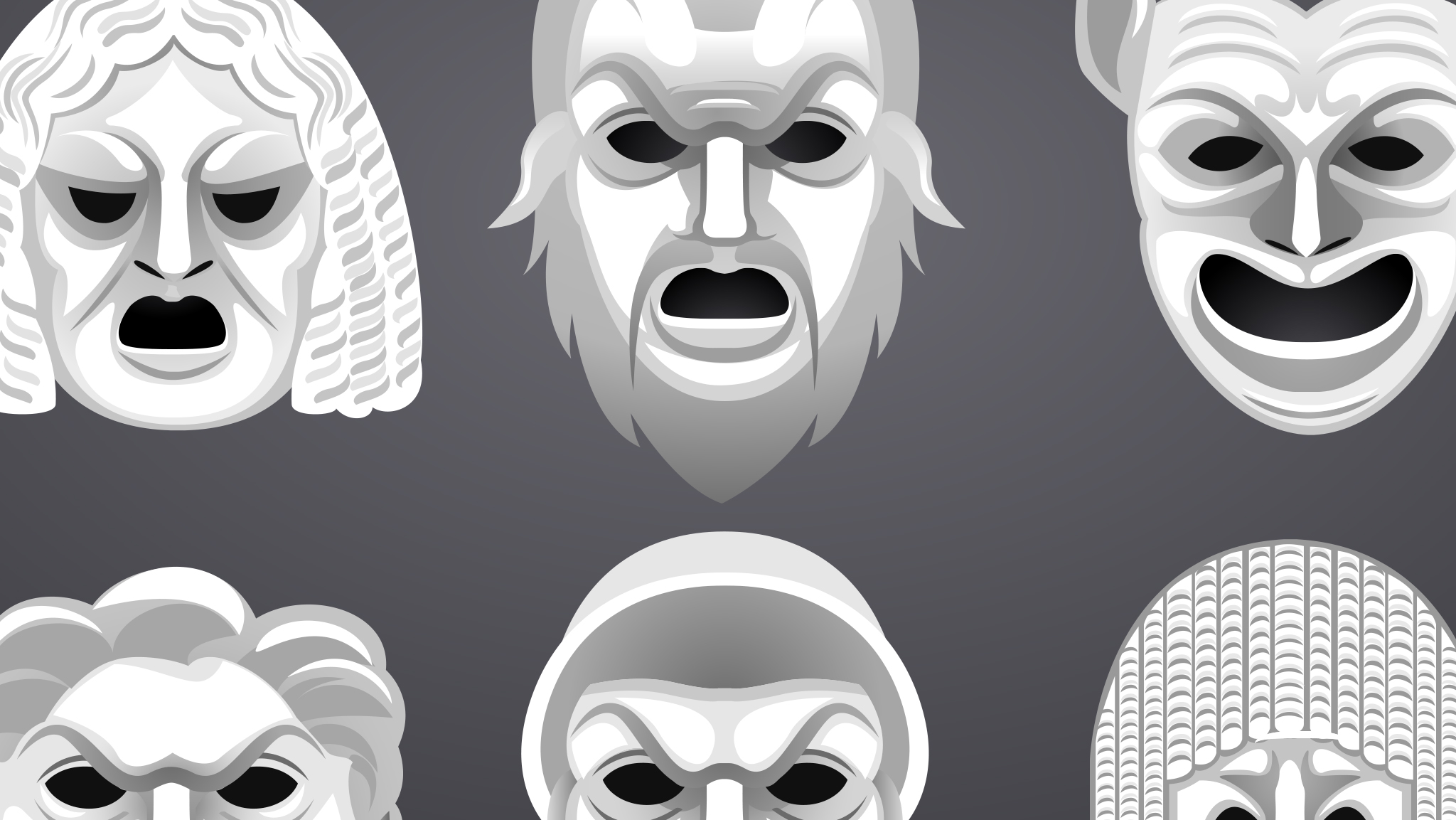 The old saying, “You can’t squeeze blood from a stone,” vividly describes the futility of trying to extract more resources from something than it has to give. The expectations the Greeks have for renegotiating their debts requires them to do exactly this, squeeze blood from a stone. Only by increasing tax collections can Greece reverse the painful reduction in government spending, services, and employment known as austerity.

Today’s Greek crisis is no longer about its involvement in the euro. Nor is it about the disconnect between unified monetary policy and disparate fiscal policies—as important as that inconsistency is. The present standoff is a powerful demonstration of the limit to debt-financed consumption.

The amount of debt that Greece has accumulated is staggering. Where will the money come from to repay the mountain of obligations as they come due? In principle, Greece can take one of three routes:

1. Create the necessary new wealth through economic growth,
2. Transfer resources from existing programs to debt service, or
3. Kick the can further down the road.

But, given its meager growth prospects, the Greek economy cannot hope to generate the new wealth necessary to repay its maturing debts. And with the recent election of the Syriza party, voters have effectively rejected the implausibly deep and sustained cuts in government spending and services necessary to meet principal and interest payments. Greece may be able to “extend and pretend”—stretch out its past debt and make believe it will be able to pay it off—but no new credit will be available. The now unavoidable and obvious result is that Greece has hit its limit for debt-financed consumption.

The troika of European lenders (the European Union, the International Monetary Fund, and the European Central Bank) who hold Greece’s fate in their hands is insisting that the Greeks cut government spending in order to “live within their means.” But the reforms demanded go far beyond shifting amounts between lines in the budget. Implementing the reforms stipulated by the troika requires a dramatic shift in the entire ethos that characterizes the country’s economic culture.

For Greek citizens, tax evasion rises to the level of a national sport. The Wall Street Journal recently estimated that at the end of 2014 the Greeks owed their government €76 billion ($86 billion) in unpaid back taxes, roughly 35% of GDP! The Syriza party ran not only on an anti-austerity platform, but also with strong anti-tax rhetoric. As the party’s election became more and more likely, many Greeks halted tax payments, resulting in January 2015 tax revenues that were 23% below expected levels (Karnitschnig and Stamouli, 2015). Needless to say, this does not herald fundamental change. 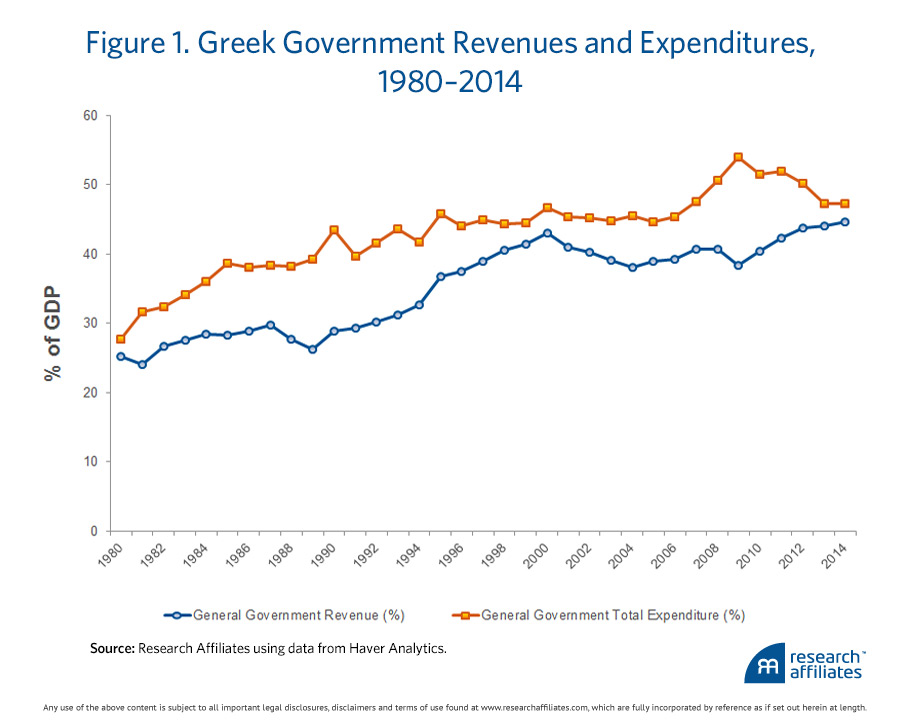 Obviously, this phenomenon was not brought about by Greece’s entry into the eurozone in 2001, although the fiscal deficit did reach a peak gap in 2009, with general government expenditures climbing to 54% of GDP and government revenues to 38%.

Many decades of unchecked spending and lackluster tax collections, as shown in Figure 2, have resulted in government debt levels soaring to 175% of GDP, a ratio that has only risen more with the recent program of fiscal austerity. 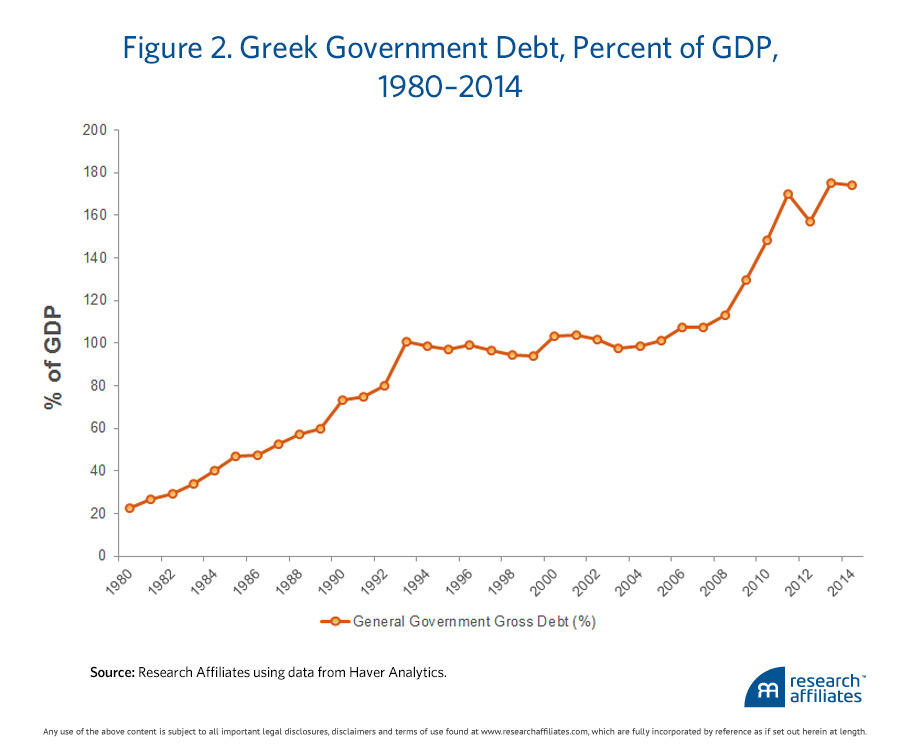 True, spending restraints have helped push Greece into a primary budget surplus, illustrated in Figure 3, for the first time since the dubious statistics of the mid-1990s and very early 2000s were published. (The data were probably manipulated as Greece pushed for admittance to the eurozone.) But even if debt levels have fallen, GDP has fallen faster—at an average rate of about 6% per year over the last five years. The prescribed cure has arguably made the patient sicker. 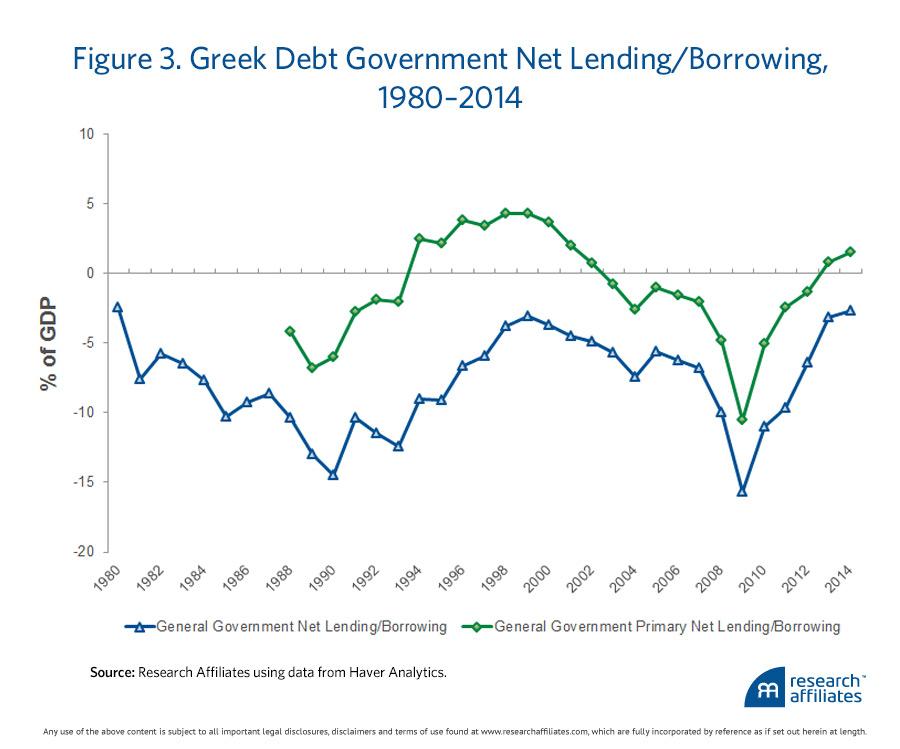 A simple calculation on a bar room napkin defines the scope of the problem. With the current account positive for the first time in more than 35 years, as Figure 4 shows, let’s assume a relatively rosy scenario: Greece sustains the 3% primary budget surplus demanded by the troika. In addition, the government brings the real GDP growth rate to a level equivalent to the real interest rate on its debt through a combination of current account surpluses and slower cuts in government spending. This is not an easy task. If, however, this scenario plays out, it would still take 30 years to bring Greek’s debt levels down to a more reasonable—and perhaps still unsustainable—85% of GDP.1 This is a big ask for a country that voted for political upheaval following just three years of austerity policies. 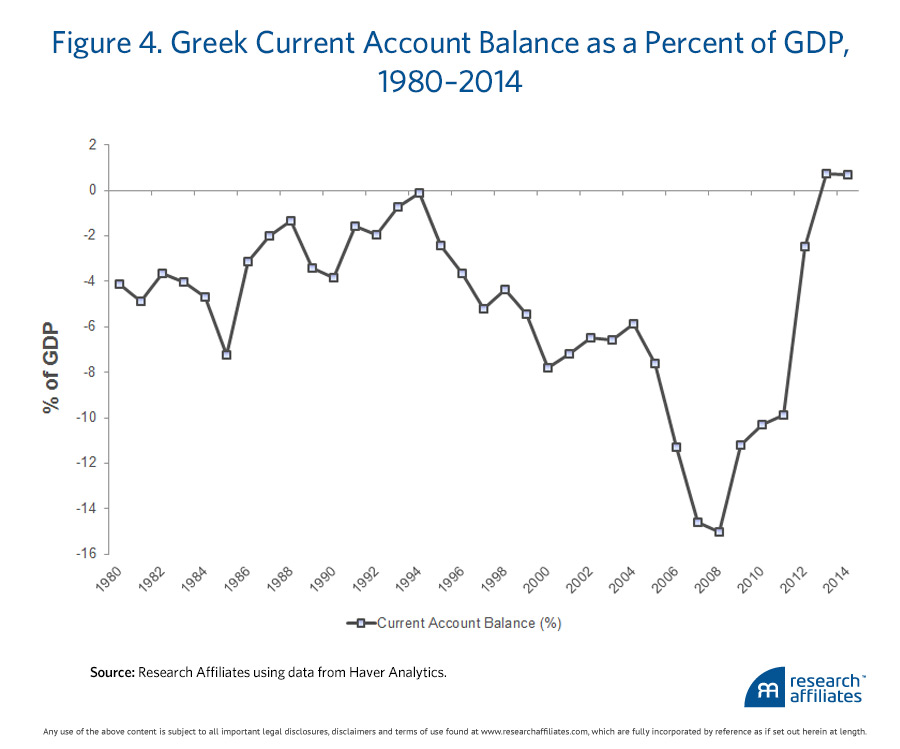 And so we arrive at the present impasse. Greece cannot borrow more. By definition, the pool of lenders is exhausted once the lender of last resort walks away.

Regardless of whether Greece’s participation in the euro facilitated its final burst of borrowing, exiting the euro now is no panacea. Suppose the Greeks were to depart from the eurozone, repudiate their debts, and return to the drachma. Greek banks would fail, and capital controls would be imposed. Devaluation would increase export competitiveness but cause imports to become prohibitively expensive. With complete control over both fiscal and monetary policy, the Greek government would be free to print and spend drachmas without restraint. But those drachmas would not buy many goods and services priced in euros or dollars unless, and until, the government’s spending was limited to its tax collections.2 In this scenario, the Greeks would still be constrained to living within the resources generated by their real economy.

So, the spotlight on the Greek drama the world is watching illuminates the danger that other countries with growing external debt should keep top of mind: High debt burdens, above and beyond those that can reasonably be repaid by future real economic activity, will invariably bring about inflation or default. If debts cannot be repaid, they will be—in countries where they can be—simply inflated away. But we all know, of course, that inflation is just a gradual default. The choice between inflation and default is essentially based on social and political choices (Rogoff, 2014); the level of inflation a nation accepts corresponds directly to its preferences about spending, taxation, transfer payments, and the like. This is the stuff of bloodless stones and Greek tragedies.

1. Because bar room math does not allow for compounding, debt-to-GDP ratios should decline slightly faster than estimated here. Also note that inflation in the euro may (if not incorporated into the interest rate Greece pays) help reduce the debt-to-GDP ratio, just as the current deflationary trends in the euro are exacerbating them.
2. Cochrane (2011) provides a short review of the implications of such a scenario.

Cochrane, John. 2011. “The Fiscal Theory of the Price Level and Its Implications for Current Policy in the United States and Europe.” Presentation at the Fiscal Policy under Fiscal Imbalance conference hosted by the Becker-Friedman Institute and Federal Reserve Bank of Chicago (November 19).

Karnitschnig, Matthew, and Nektaria Stamouli. 2015. “Greece Struggles to Get Citizens to Pay Their Taxes.” The Wall Street Journal (February 25).