Jim Masturzo: Cam, in our last conversation we talked about your research regarding inversions in the yield curve and what that means for the economy. Can you briefly recap?

Cam Harvey: Sure. At the time of our last conversation in April, the yield curve had just inverted. The yield curve is the difference in yields between a short-term Treasury bill and a long-term bond. It’s almost always the case that the long-term yield is greater than the short-term yield. An inversion is rare, and my dissertation many years ago showed that when the yield curve inverts, that is, when the 10-year Treasury bond’s yield is less than the three-month Treasury bill’s yield, that’s bad news. It precedes a recession, and that is what’s happened for the last seven recessions.

When we talked the last time, the yield curve had just inverted. My dissertation required a full quarter of inversion, because GDP is measured over a quarter. So in April, we had had an inversion, but not for a full quarter. As of June 30, however, we actually had a full quarter of inversion both for the 10-year bond minus the three-month bill and for the five-year note minus the three-month bill. And since that time the spread between longer- and shorter-term yields has become much more negative.

Jim: Let’s switch gears and talk about stocks. Since the end of June we’ve seen the market hit multiple new highs. We’ve also seen some pullback over the last few days and weeks. Is this normal? How does this compare to historical episodes?

Cam: One thing that’s clear is that since the 1960s we’ve had seven recessions. And we’ve had seven yield-curve inversions before each of those recessions, so this is a pretty reliable leading indicator—but with a caveat. It is a very simple measure—there’s only one variable—and it’s only a forecast (which can be imperfect).

The one thing we do know from economics is that recessions are bad for equities. The value of a stock today is the value of its expected future cash flows, or earnings. We know earnings are typically negatively impacted by recessions. We also discount these anticipated earnings to account for the estimated risk associated with those cash flows. In recessions, risk increases, which also acts to reduce valuations. Thus, both expected lower cash flows and higher anticipated risk traditionally reduce a stock’s value in a recession. The link here is that the yield curve inversion is predicting a recession. Therefore, theoretically, the yield curve inversion should be bad news for stock returns.

Jim: We’ve had seven of these episodes over the last 60 years or so. Should we try to identify one of those times as being similar to today? Or should we look at an average of all of them? How should we use these historical periods in thinking about today?

Cam: That’s the question: How do we use history to get some insight into the future? One problem is that we only have seven observations, so it’s really difficult. It’s also really hard to fine-tune to a particular recession. I think the best thing to do is to look at the average, and that’s what I’ve done.

I created an historical analysis, investing in the market right after the yield curve has been inverted for a full quarter and holding for three years. With the most recent episode, that investment occurs on the first trading day of July, following the end of the second quarter on June 30.

On average, investing in the market after a yield curve inversion is not a good idea. The first year’s return after an inversion is negative, about −9%, and the cumulative return for three years is also negative. Thus, on average, now is not a good time to be heavily exposed to the stock market. It’s also interesting that before the inversion, on average, equity returns are highly positive, just as we’ve seen. 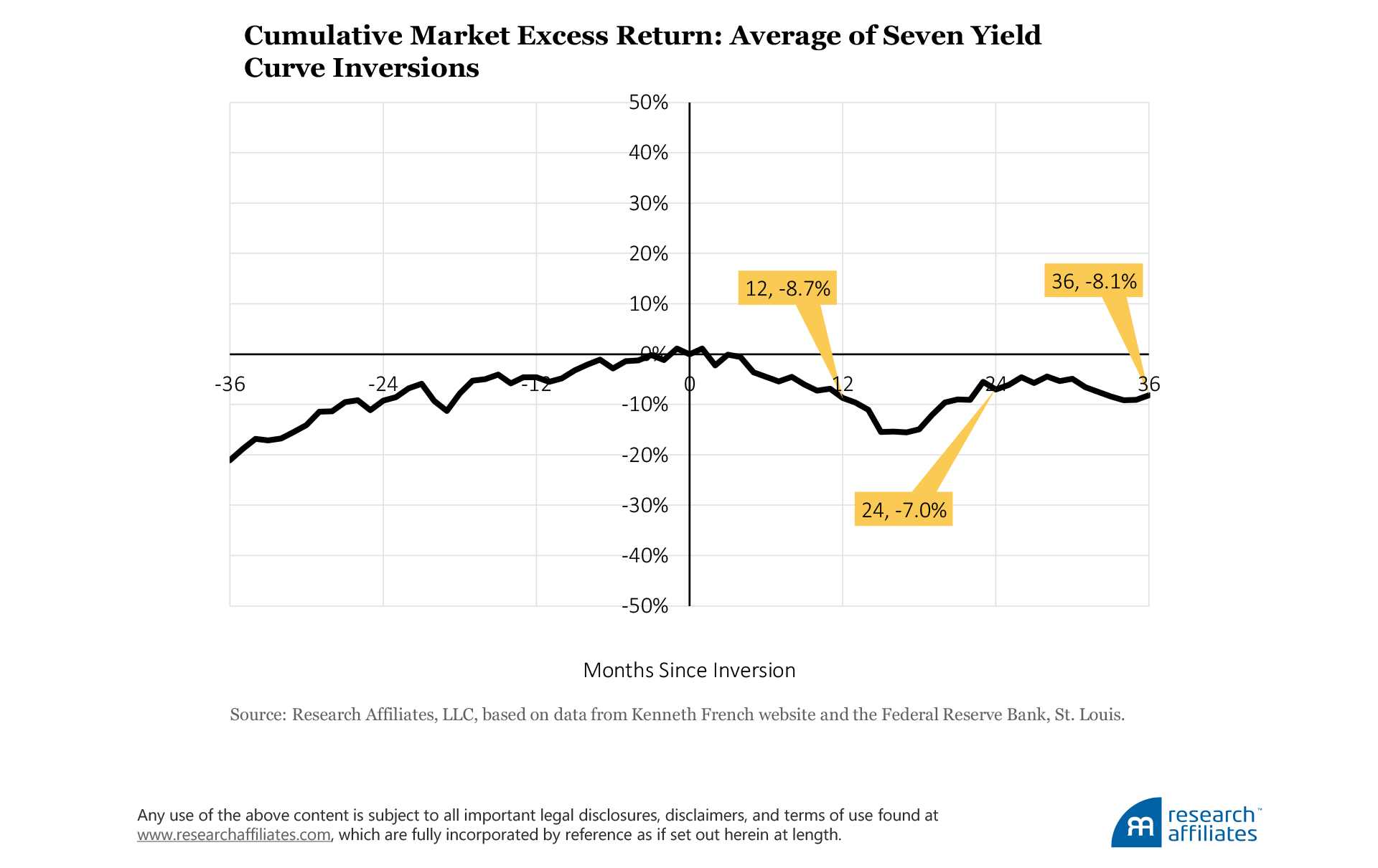 The qualifier, obviously, is the variance we see among the individual recessions. In some recessions, the negative returns are very small. The 2001 recession didn’t even produce a year-over-year negative GDP growth rate and is actually associated with small positive returns in the market. So not every single inversion is followed by strongly negative returns, but, on average, it is, and I think that investors need to be aware of that . 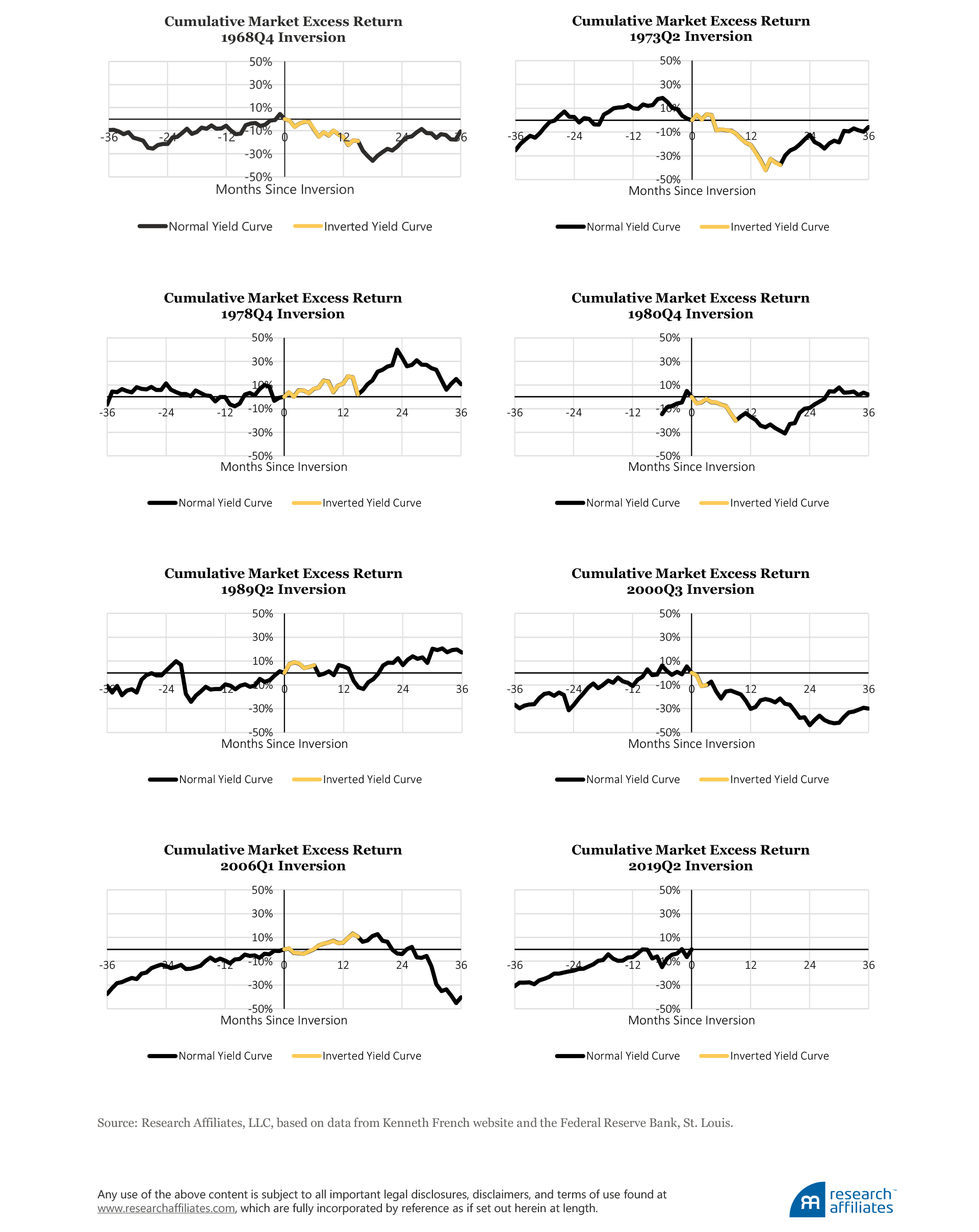 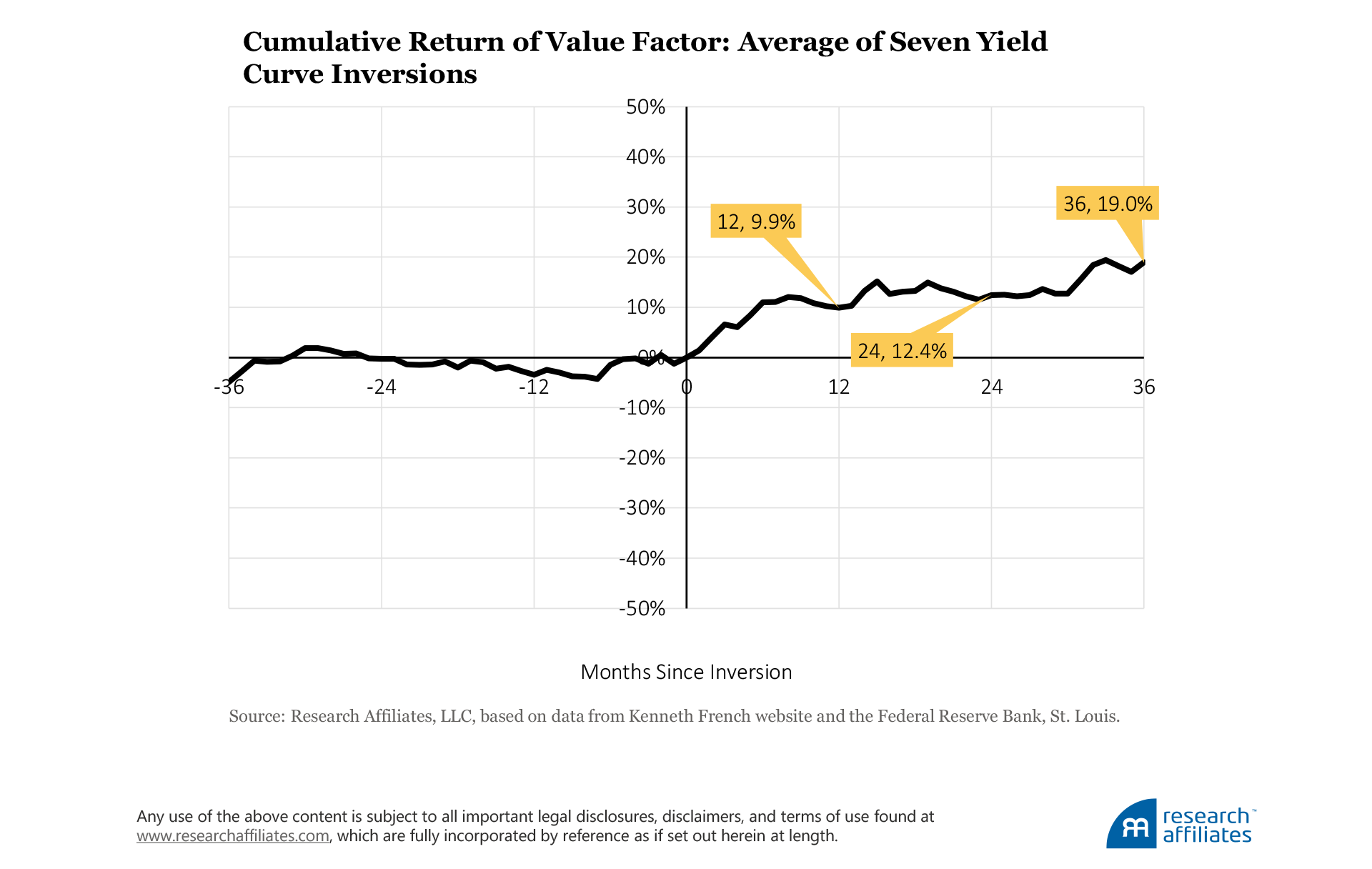 This is exactly the time when investors should be looking at their portfolios and asking, “What is my exposure to a recession? Is my portfolio properly positioned to minimize the damage that’s associated with a recession?”

Now is the time—as the risk of recession is dramatically increased—when asset managers earn their keep and when investors and advisors should re-examine the positioning of their portfolios, asking “Do I have the right mix of assets and investments so that I’m as protected as I can be?” Factor investing is an obvious tool available to mitigate some of the downside risk.

Jim: I’d be remiss if I didn’t ask you about the Fed’s response to the yield curve. We’ve seen the Fed begin to lower rates in an effort to jump start what might be a slowing economy or to head off other risks. That could cause the yield curve to become upward sloping again, all else being equal. What are your thoughts on this?

The idea that the Fed raised the short-term rate too quickly, which led to the yield curve inversion, and that they can undo the damage by lowering it again, is naïve. The Fed can cut the short-term rate, but as I mentioned they have no control over what happens in the long end of the curve. It could be that the cut in the short-term rate was already factored into rates throughout the curve. The possibility that the long-term rate could decrease after a Fed rate cut was, indeed, exactly what we saw.

Jim: So are you saying that the Fed has very limited ability to influence the current direction of the economy?

Cam: I’m not saying that the Fed has no influence. Central banks, in general, have substantial influence. The issue is, is it a positive influence or a negative influence?

Look at rates around the world. We have a crazy situation in which 60% of sovereign developed bonds have negative yields. The German yield for the 10-year bund is -0.6% and for the 30-year bund is also negative. Some people in Europe are even being paid to take a mortgage. Is that an equilibrium situation, a long-term sustainable situation, that’s good for the economy? I don’t think so.

The thing that worries me the most is that with really low rates companies are tempted to invest in projects which have extremely low rates of return because the financing is so cheap. This type of overinvestment serves us poorly by reducing economic growth in the long term. So, yes, central banks have very substantial influence that is often distortionary. We’re living it right now, and we will pay the price for a number of years.

Jim: Those are great thoughts. Thank you, Cam, for joining us.

This Conversation is based on