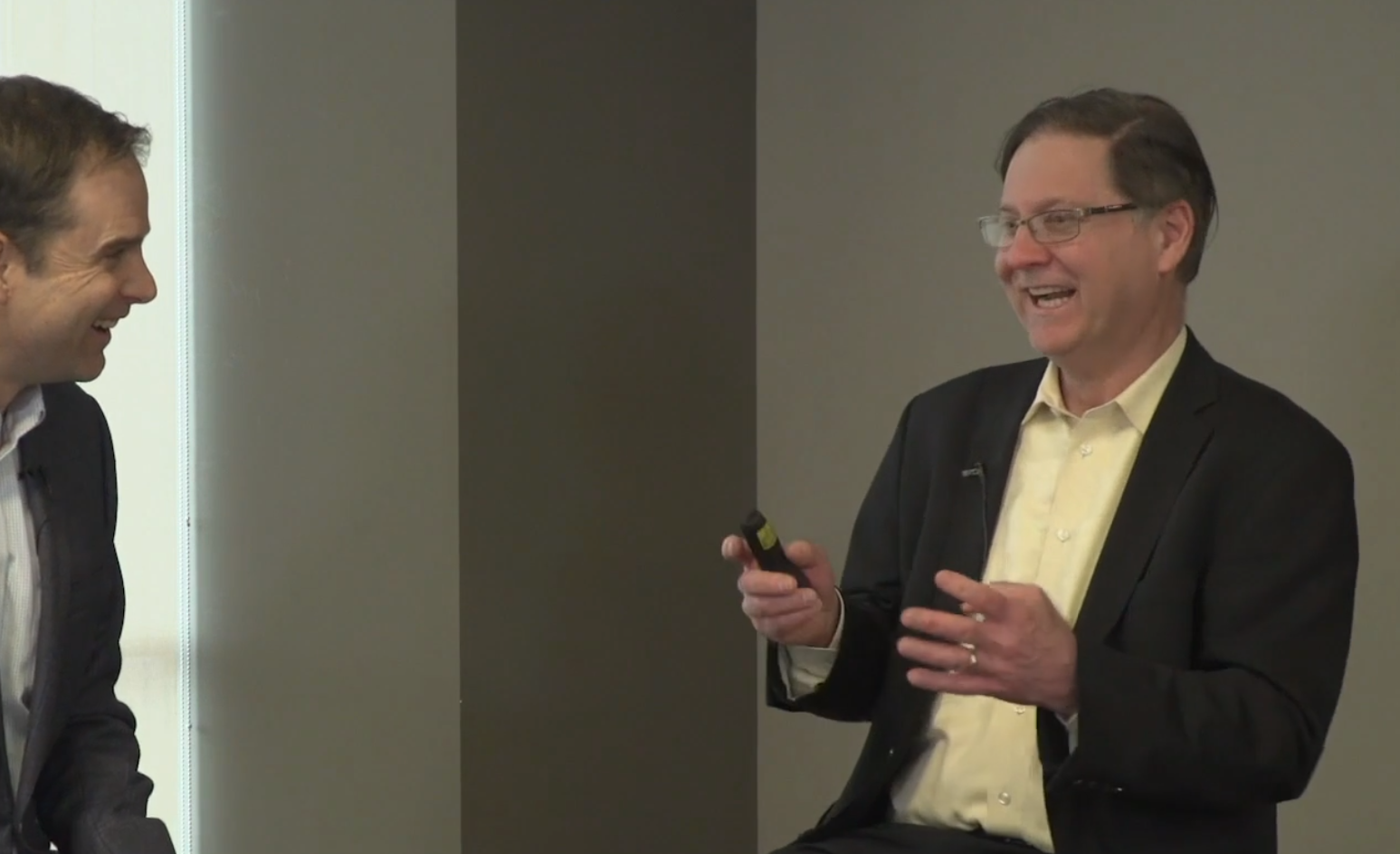 John: Hi, I’m John West, one of the partners at Research Affiliates. Today, I’m joined by one of my fellow partners at the firm, our senior advisor, as well as a professor at Duke University, Cam Harvey. Cam, welcome.

John: Cam, today we’re going to discuss some of the issues related to cryptocurrencies, robo—the rise of the robo revolution—as well as another investment I know you’ve done a lot of work with—gold, as an alternative to fiat currency. So with that, let’s get started with cryptocurrencies. One of our most popular talks, ever, at many Research Affiliates advisor events has been your discussion on cryptocurrencies, which I believe is your introductory lecture to your course on cryptocurrencies at Duke. Maybe you can tell us a little bit, being an early advocate of cryptocurrencies, where we are today and how you see that playing out.

Cam: Let me first qualify the word advocate. I have taught a course for the last six years on blockchain technology. This technology involves a potential revolution in innovation in many different aspects of industry. One component of that is cryptocurrency. In my course, I talk about the hype behind this and I try to cut through that hype. There are some really good ideas here, but there are also some really bad ideas. I do recollect giving the talk at the RA Advisor Symposium, so I include a very broad definition of student. I just try to help students navigate this space, which is very complex.

So let me try to describe what we’re talking about and give an overview as to where we’ve been. Number one, what is blockchain? It is a distributed database. A centralized database is controlled by one entity; it resides on a central server, and the entity can edit the database. But blockchain is a distributed database—residing on multiple servers and controlled by no one entity. In the graph on the far right side, each one of those dots is a node. And each one of those dots has a copy of the database. So, the technology removes the single point of failure. The degree of transparency is a choice within this technology.

And one crucial idea is that this database is immutable. Once you put something in the database, it’s there forever. So, think about an Excel spreadsheet with 200 rows of data. We can easily go back and edit row 100. With blockchain technology, we can’t do that. Row 100 is there forever. We can add a new row, row 201, but whatever is in the past remains.

We can do this with cryptography, where we divide the database into blocks, or sheets. At the end of each of these subsheets or blocks, there’s a fingerprint unique to the data in that block. That fingerprint is repeated as the first line of the next block. And that’s why it’s called blockchain. There’s a commonality. The last line is identical to the first line of the next block.

The reason this database is immutable is that if anybody went in to change a block, to edit the data, say, to edit row 100, then the fingerprint is altered at the bottom of the block. It wouldn’t match the fingerprint at the top of the next block. The network sees this. And given that there are many different copies of the correct block, the network will replace the corrupted block with the correct block so the last line equals the first line. It’s a very interesting technology; consider all the possibilities. Having this immutable database allows us to establish a registry of the truth. That might be that I own this piece of land. Nobody can edit it. The government can’t do it. The bank can’t do it. It is set in stone.

It also allows us to easily transact. I can add a row, row 201, where I sign over my ownership of the land to you, and we’re done. I don’t control it anymore; you do. And it’s there forever. This idea of verification of ownership and the efficient transfer of ownership are the main advantages of this technology.

But it’s controversial. Initially when the cryptocurrencies, like bitcoin, came out, they were used for illegal transactions. And not so long ago, people are saying—for example, Jamie Dimon—that bitcoin will eventually blow up. It’s a fraud. When I saw this, I thought it was interesting because bitcoin’s a computer program. Right? It’s not a company. There’s no CEO, no board of directors. It’s a program and there is no central person controlling the program. How can the program be a fraud? And he took a lot of heat over this remark.

All of the major banks, essentially, will be issuing their own cryptocurrency. It makes a lot of sense. It’s great for investors because it reduces cost. The speed becomes a matter of seconds, rather than days, to do transfers. While most are generally familiar with bitcoin, there are hundreds of other cryptocurrencies. In addition, currencies like bitcoin are very difficult to value—and extremely volatile. But that’s just the first class of cryptocurrencies.

The second class is what I call distributed computational tokens. These blockchains allow you to run a computer program in them. You can have if/then statements. Think of a derivatives’ payoff. If the stock is above $100, you will pay out. These are basically computational platforms that can do financial transactions.

There are also utility tokens. These are fairly easy to value. For example, storage. The basic idea is the following. Many desktop computers have a huge amount of unused storage. Someone might have a two-terabyte drive, but are only using 500 gigabytes. Why not rent out one terabyte? They are paid in a coin called Storj and can sell the Storj for US dollars. There’s an active market for Storj.

And, on the other side, let’s say you want more disk storage. You can go into the network and pay with this token, because you can value it directly; the comparable is AWS Cloud Service. There’s a price for storage on AWS, a price that closely mimics that, in terms of this technology. It’s distributed storage. It’s a very good idea. There are many other tokens like that.

There are also security tokens. This is very simple. Think of the following. Indeed, one of my student’s projects dealt with this. Suppose you want to buy a share of Berkshire Hathaway. It’s pretty expensive, over $300,000 before the late February 2020 correction. Why not create a token collateralized with Berkshire Hathaway stock? Then an investor can buy $0.25 worth of the stock. An investor could have a diversified portfolio of tens of thousands of assets in very small pieces.

The last category is stable coins. Even within this category, there is a lot of diversity. For example, the JPM Coin is a stable coin. It’s collateralized with US dollars and is called a fiat-collateralized coin. Facebook with their Libra initiative wants to do the same thing. They’re in the unique position of having billions of users just ready to go, but there are regulatory issues. Many policymakers are wary of Facebook, but Libra is a similar idea to JPM Coin. The coins are collateralized with natural assets, like gold. Instead of actually holding the gold or holding a gold ETF, you have a token that represents a certain amount of gold.

And a very interesting option is a stable coin that’s collateralized with crypto. It’s the MakerDAO Dai coin, which is remarkably stable even though it’s collateralized, specifically it is overcollateralized, with other cryptos. And, of course, we will eventually have national crypto fiat. We haven’t seen these emerge yet, but it is obvious all the central banks are working on these digital initiatives. There is already an acronym, CBDC (central bank digital currency). It’s just a matter of time before we actually get there.

Cam Harvey cuts through the fanfare on cryptocurrencies, one of the most popular topics from RA advisor events. He begins with a brief explanation of his views on the advantages of blockchain technology.

For more information about the topic of this Conversation, we refer you to